#Polyversal is an open-source tabletop miniatures game with its own backstory that players can help fill in. Learn more about that backstory in this blog post.

Polyversal does not lock you into a particular story or setting. You may generate your own background story, or simply play the game. We do have a story that sets the tone for the conflict we envisioned within Polyversal. It is set between a future, powerful United Nations (UN) that controls the technology required for mass evacuation from a dying Earth, and groups of Opposition Forces (OPFOR) who fight for those who may be left behind.

It is the end of the 21st century and the UN is the omnipotent power, running an all-powerful one world government to which many countries joined freely while others have been coerced and capitulated, forsaking their sovereignty under the guise of harmony and security. But a perilous one world government is not our only problem, for mankind faces an even greater threat.

Once peaceful weather control technologies were developed by the UN to tame Earth’s increasingly violent weather patterns, but, use of the technology leads to an erosion of Earth’s magnetosphere, allowing in massive amounts of extinction-level radiation.

The Earth’s atmosphere is failing after centuries of abuse and with it man’s supremacy, forcing the world’s leaders to look elsewhere for sanctuary and safe harbor for the human race. Time is of the essence and lacking the proper heavy lift capabilities to transport billions of people off planet before the atmosphere completely fails, a harsh plan is put into play by the government.

The UN moves forward with plans to execute the controversial operation known as Polyversal, using scanfabbing as the solution for mass evacuation. Unfortunately, it is used primarily for the powerful and well connected, creating mass chaos among those who will remain to perish.

In the name of “Peacekeeping”, the UN fights to protect and maintain control.

Many former States band together, taking up arms against the UN’s plan, knowing it is their only hope for survival. Opposition Forces (OPFOR) units form as former national enemies unite, mercenary groups seek fortune at the hand of the UN while ragtag militias stand against the heavy-handed military forces of an all-powerful government.

The OPFOR fights against UN oppression, cessation of sovereignty by previously “free” countries, and those who will be left behind in the wake of the impending death of the planet. Survival of citizens who are not chosen is one of the primary OPFOR objectives. Both the UN and OPFOR have access to a wide range of weaponry as well as dedicated soldiers fighting for their respective causes.

Battles are waged on the land, across the sea and in the air, as free people band together and fight to survive and flee a dying planet, and with it, oppression. It is a time of total war, a time of chaos.

As the creators of Polyversal, we’ve always wanted to create a story framework that you can pull from and use in your games as you see fit. We also want to see (and will ask) players help us flesh out the story using a wiki-type site that encourages your creativity. The possibilities are endless. Below, we share a small piece of our story, an address to the Peoples of the United Nations as given by Secretary General Kagiso Tendaji on April 21, 2094.

“We travel together, passengers on a little space ship, dependent on its vulnerable reserves of air and soil, all committed, for our safety, to its security and peace. Preserved from annihilation only by the care, the work and the love we give our fragile craft.” Adlai Stevenson, United States Ambassador to the United Nations, Address to ECOSOC, Geneva, Switzerland July 9, 1965

As the 21st century draws to a close, we survey our wrecked spaceship earth, and look to its nearest neighbors for salvation. The hope and optimism of the 2070s and 80s are over. The technologies that were to liberate us from nature itself have failed. The seas have sought their revenge. The atmosphere, once thought to be under our control, has thinned to a useless whisper, no longer protecting those who survive here from the sun’s brutal radiation. It is time to leave.

Although our reach in the solar system has expanded beyond the asteroid belt to the moons of Saturn and Jupiter, there remain over 10 billion people here on Earth. Even with the full-time efforts of our military fleets and every corporate and private vessel capable of flight, we will be unable evacuate everyone before the complete failure of our atmosphere. It is for this reason that, effective today, the United Nations ban on the transmission and fabrication of human matrices has been lifted by votes winning broad support in both the General and Parliamentary Assemblies. It will remain forbidden to fabricate a human matrix on Earth. However, matrices may be transmitted by Tayanur, for fabrication off-world.

The controversy surrounding the fabrication of human matrices has not ended. Nor will today’s historic vote affect the deeply held convictions of those who oppose scanfabbing human beings. We cannot know the depths of the human soul, if, as many believe, such a thing truly exists. The brightest minds of our generation have debated these matters at great length. Their debate will no-doubt continue, as it has since the dawn of debate itself.

However, in the face of the sudden destruction of our planet’s surface, the question of what is right must take a back seat to what will work.

Before today, transporting people beyond Earth’s orbit required an enormous ship, expensive fuel, and precious time. Tayanur transmission occurs faster than the speed of light, using our existing communications networks set up by our pioneers. Use of this technology is the only way to maximize our chance of survival as a species.

Because of this, I have been authorized by the Security Council to reveal Operation Polyversal: the United Nations Humanevac Operation for the Peoples of Earth.

In anticipation of today’s historic decision, scanfab centers have been constructed in undisclosed locations in and around the key population centers of Earth. Our goal is to use the system to transmit as many people off of the planet as possible, within the limitations of the infrastructure set up to accept them off-world.

Polyversal has been designed to ensure fairness and to optimize efficiency in the selection, scanning, and transmission of those fortunate enough to be selected for the operation. I say, “selected,” because, those who will participate have been selected by computer. We will be unable to scan everyone before it is too late. Accordingly, a sophisticated computer algorithm has chosen the ideal participants, factoring for traits necessary for the survival of the species. Naturally, the algorithm has selected people from across the globe, with abilities in every field of human endeavor. The algorithm was impartially programmed by top UN scientists, and has access to the entire UN ID database, which includes the genetic information of every UN-registered citizen on the planet.

On May 1, all participants will be notified. If you receive the official notification, you will be given specific instructions on how to participate, and when and where you must report. Follow them closely. If selected, you must keep the knowledge of your participation a secret, for your own safety. The Security Council expects, and is prepared for, mass public protest, lawlessness, and general unrest. We urge all citizens to cooperate with uniformed UN peacekeepers, and to remain peaceful and orderly at this time. Fighting your neighbors will not save anyone, and may jeopardize the very goal of Operation Polyversal.

Mankind has survived on this planet for millions of years. We have expanded our habitat from a few caves and patches of fertile ground to every corner of the world. We have lived in the deserts, underground, underwater, on the polar ice, in the clouds, in the vacuum of space, and on a dozen other inhospitable rocks in our solar system. The time has come to say goodbye to the place of our birth. In a decade or two, perhaps, we may be able to return, perhaps able to repair the damage we have done. Perhaps that return will have to await our children, or our children’s children. It is too soon to tell.

All we know for now is that we must go.

Over one hundred years ago, philosopher Marshall McLuhan observed “There are no passengers on Spaceship Earth. We are all crew.” As her crew, we have done our best to save our precious spaceship earth. There is no more that we can offer her. It is time to abandon ship. The functions of government will continue off-world, and here on Earth for as long as conditions will allow. It is an honor to lead the Peoples of the United Nations, and I will continue to do so for as long as I am able.

May peace be with us as we take our last steps on Spaceship Earth.

Address to the Peoples of the United Nations 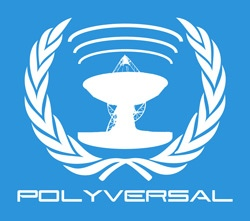 Have you seen our Story Teaser video? Check it out here.

Game Designer and Publisher of tabletop board, card, and miniatures games in the Hobby Games market. View all posts by cewargames

One thought on “The Story of Polyversal”